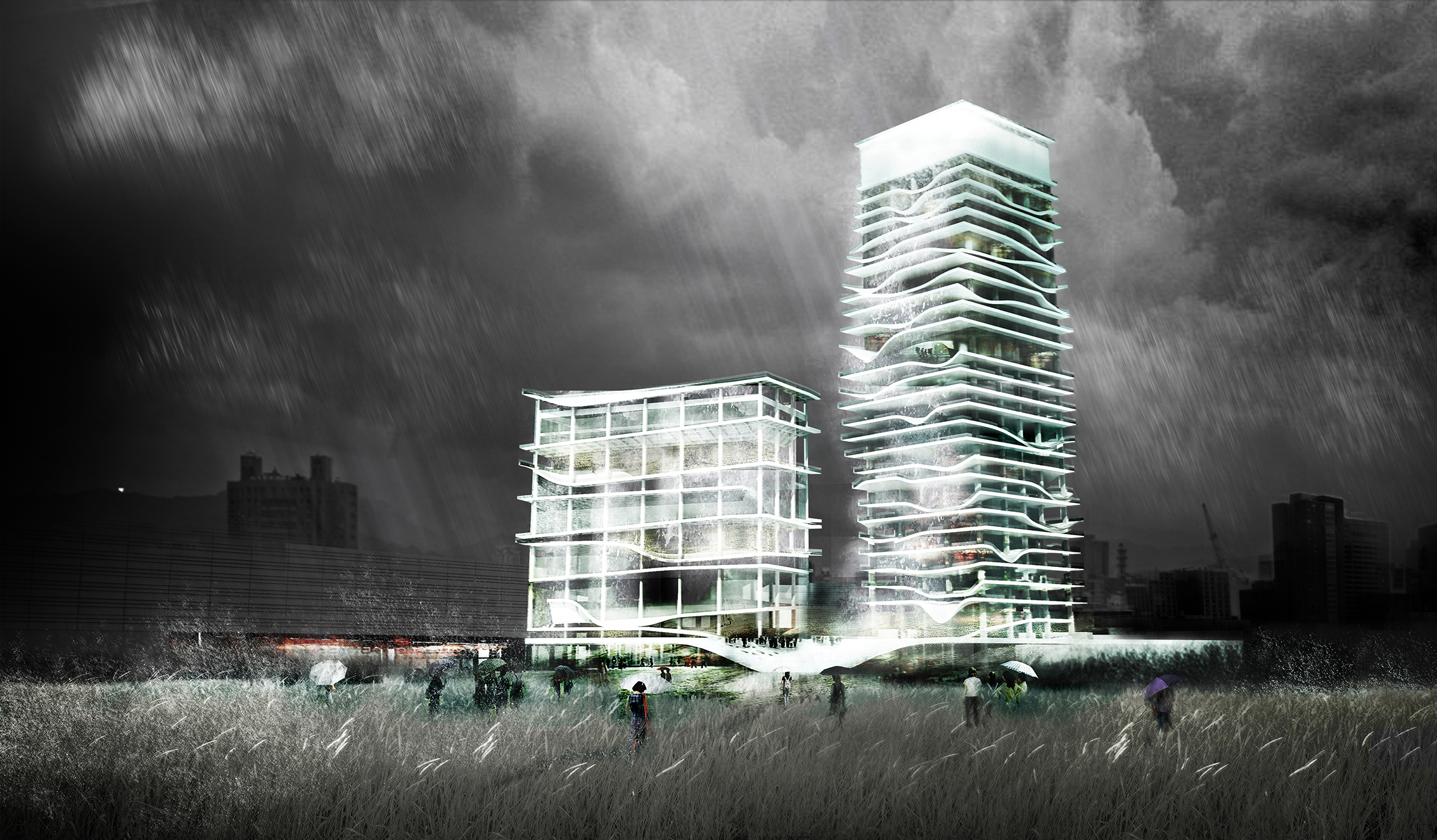 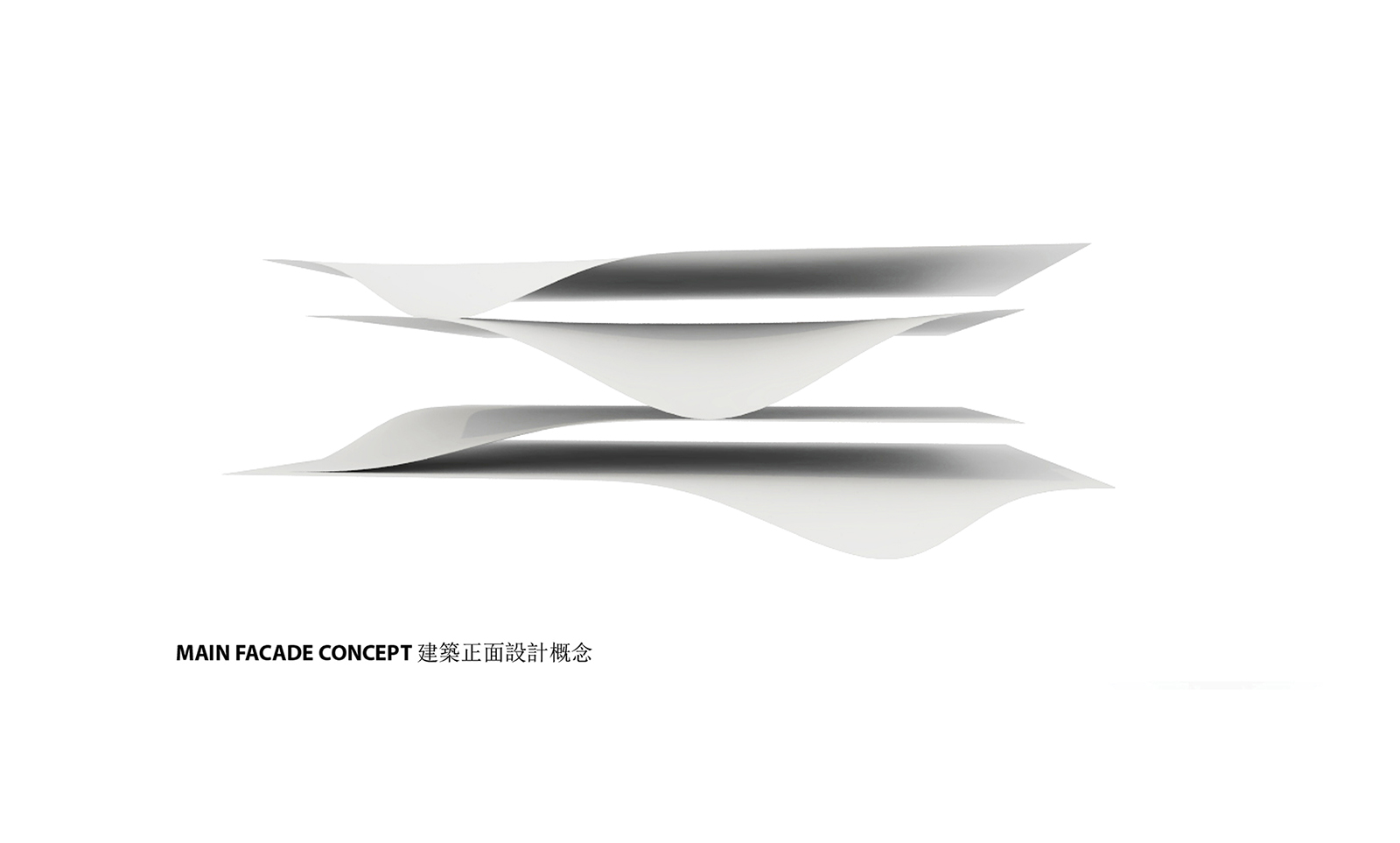 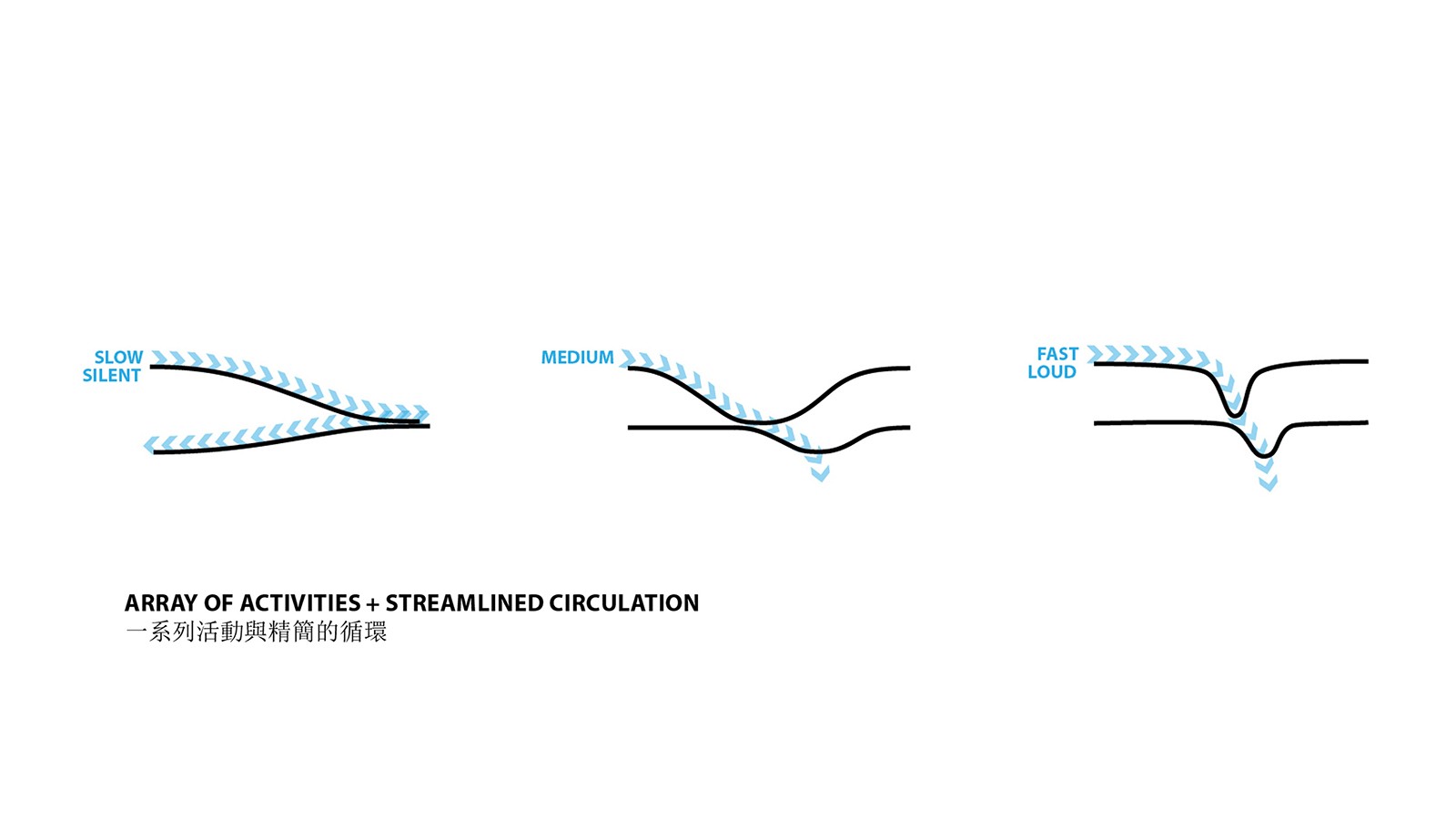 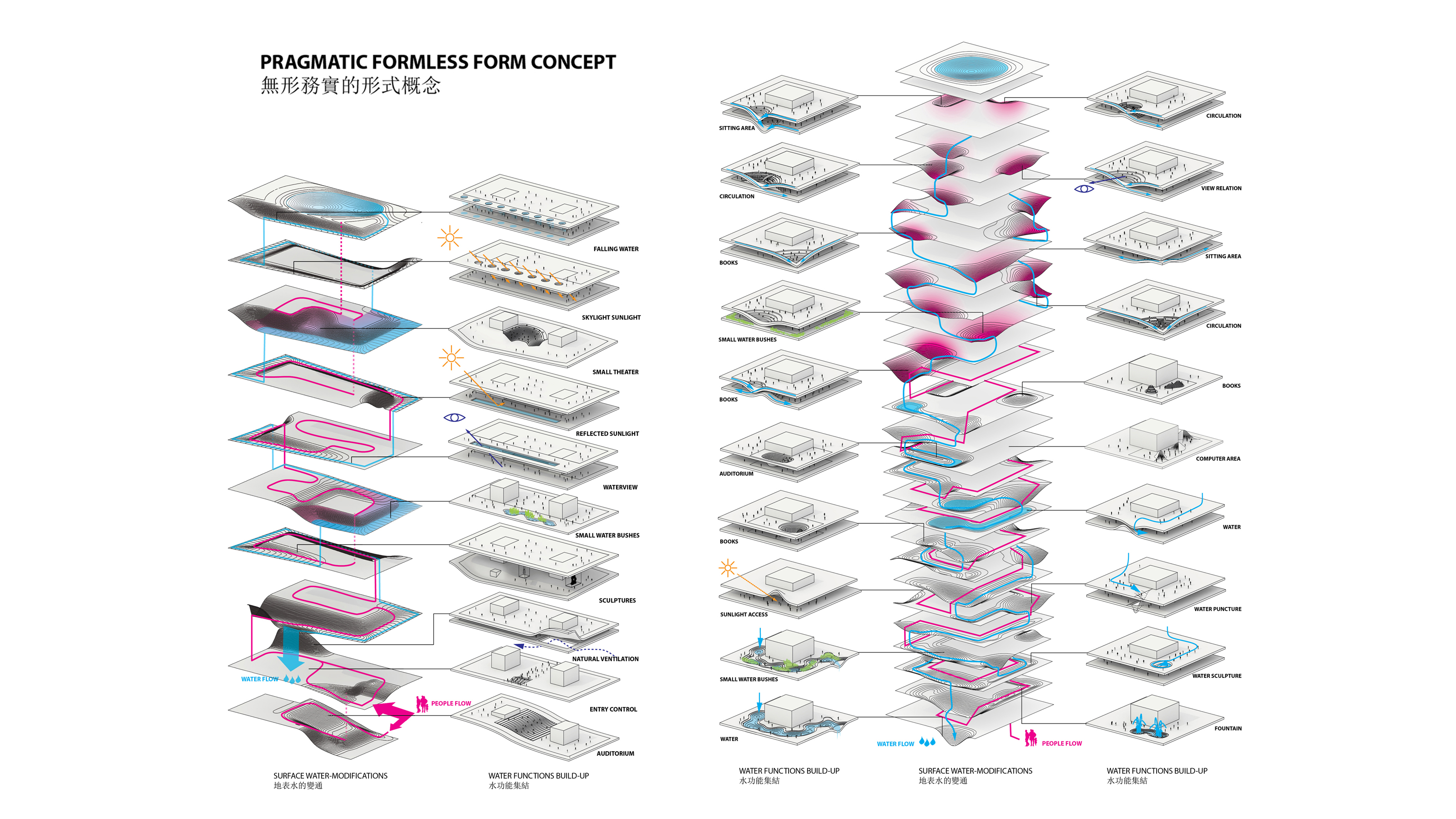 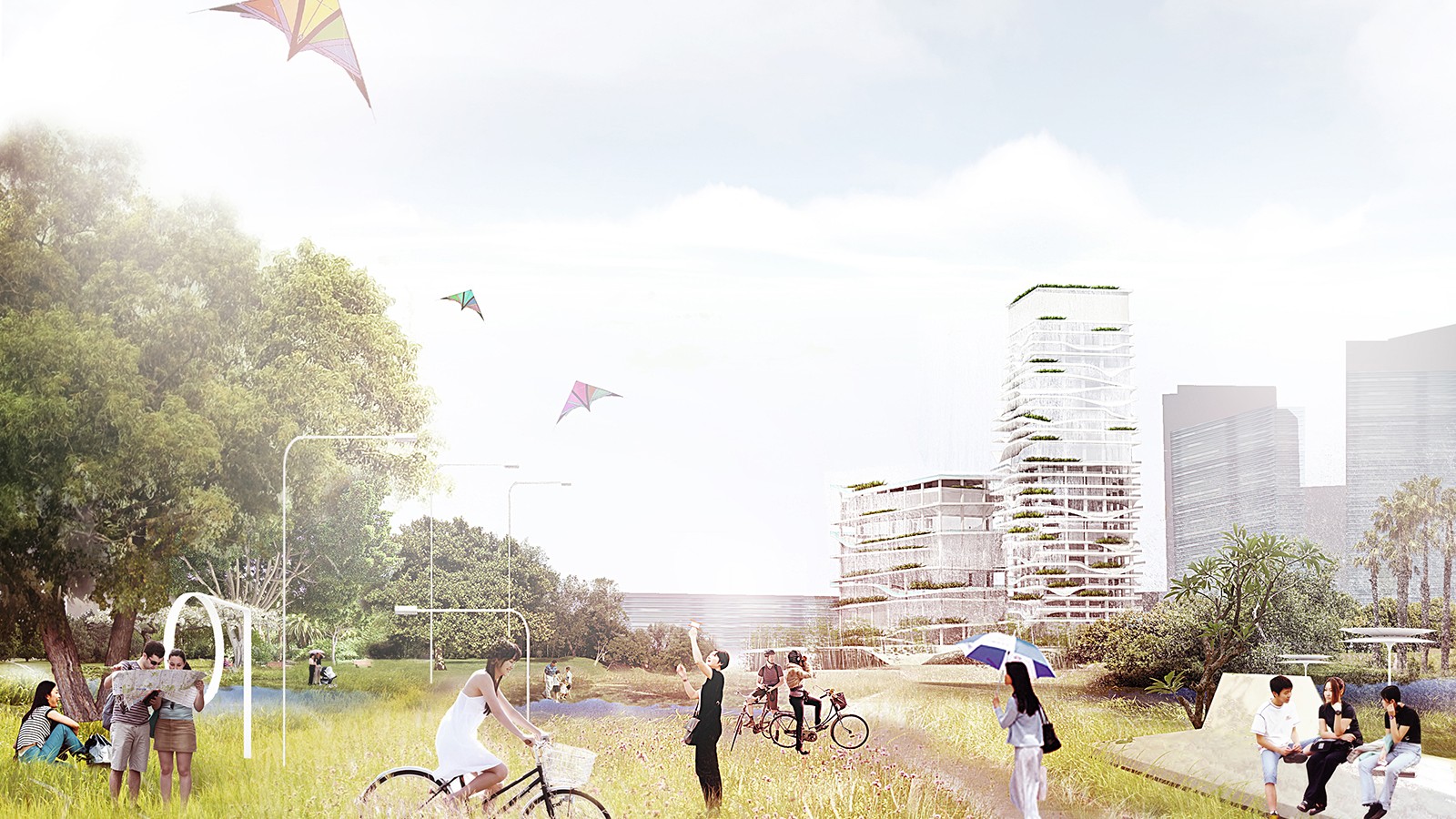 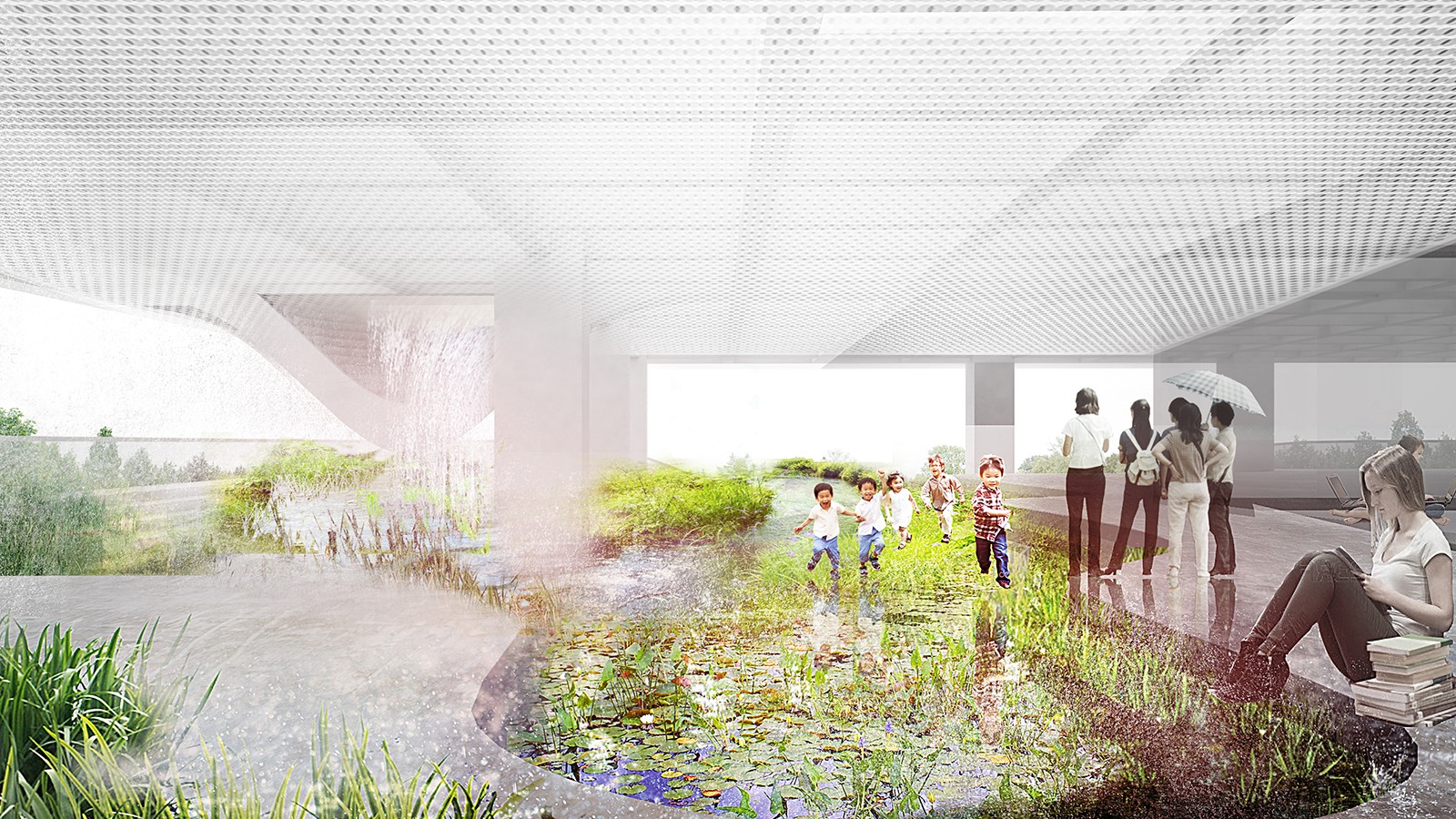 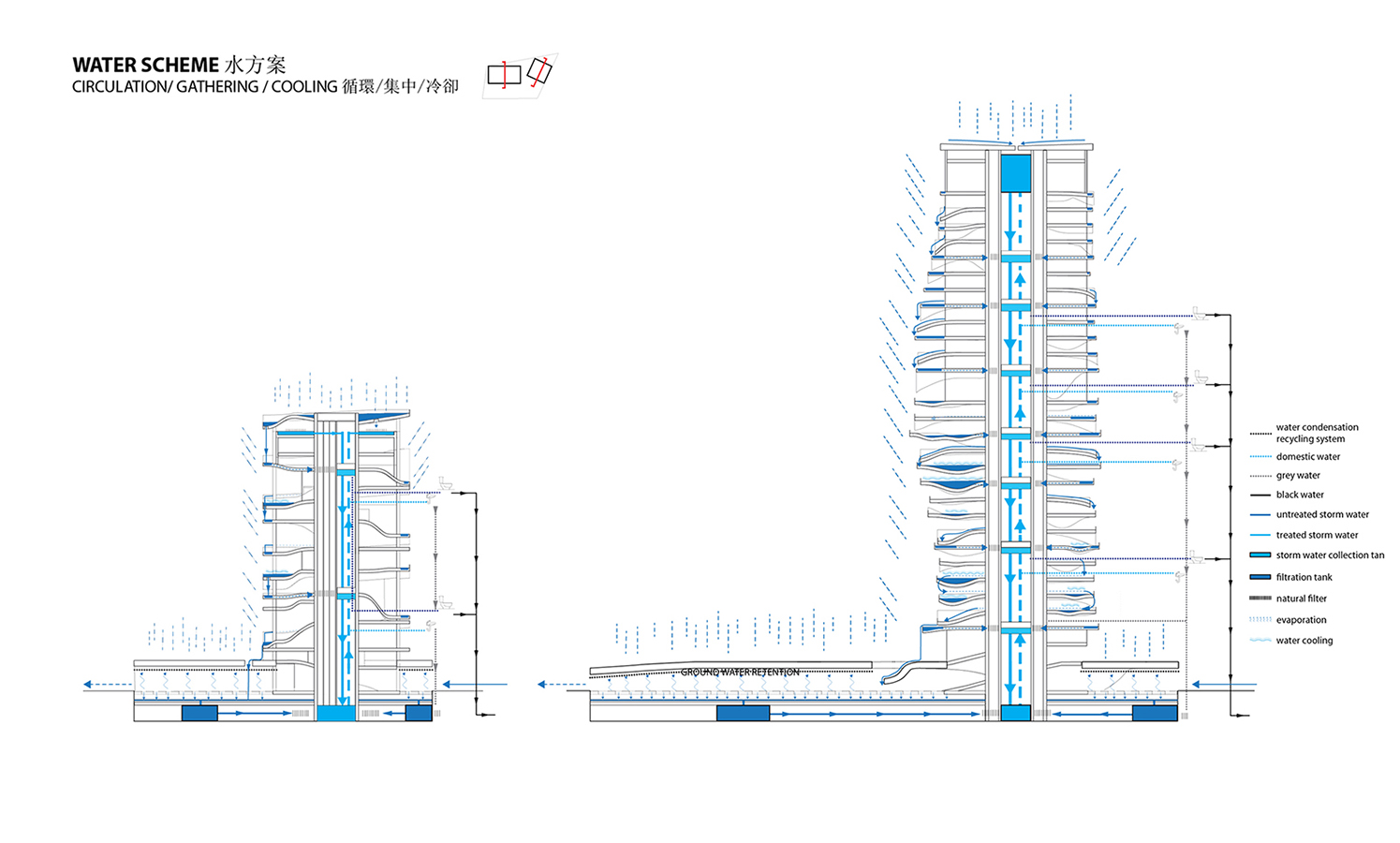 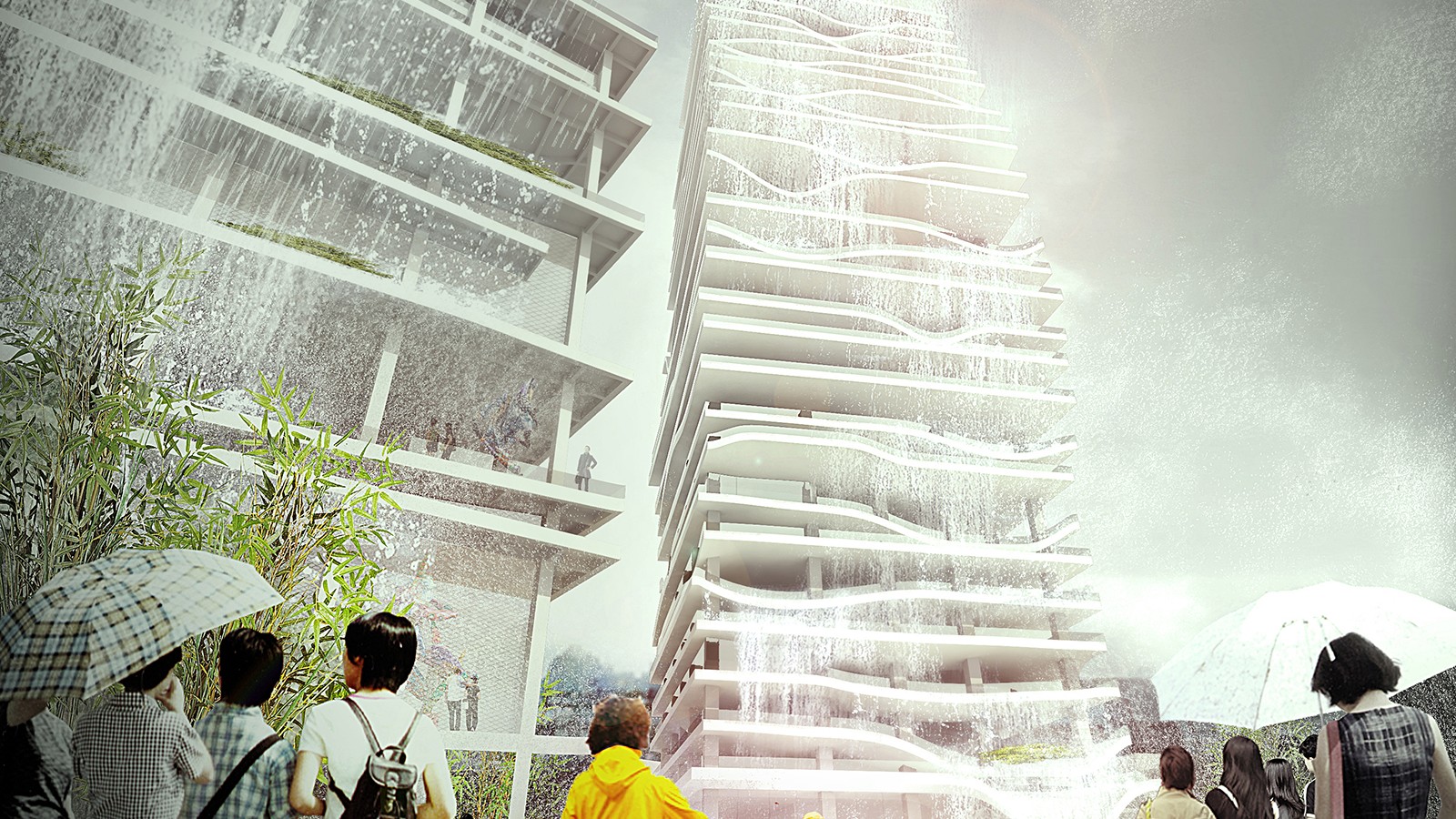 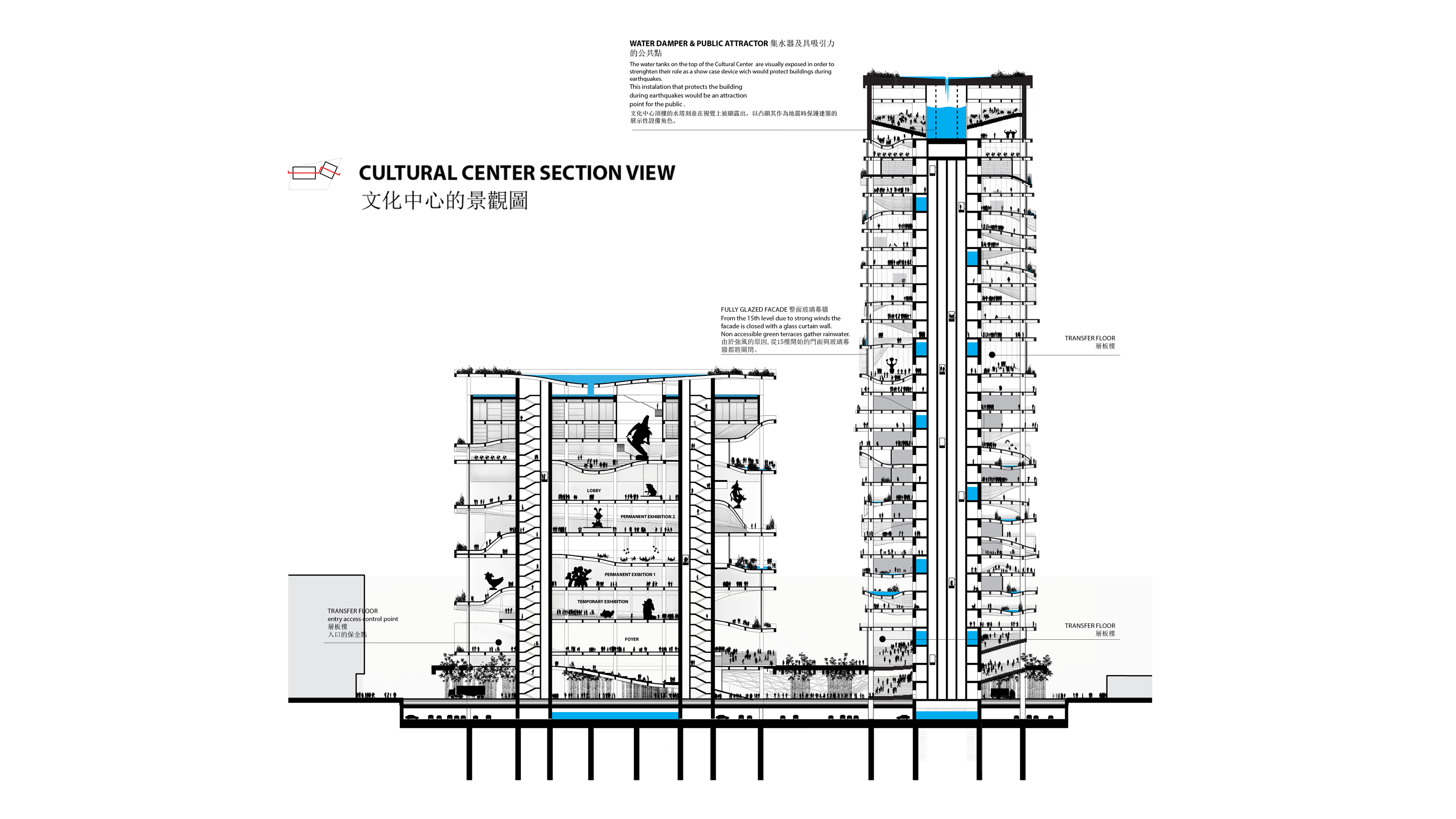 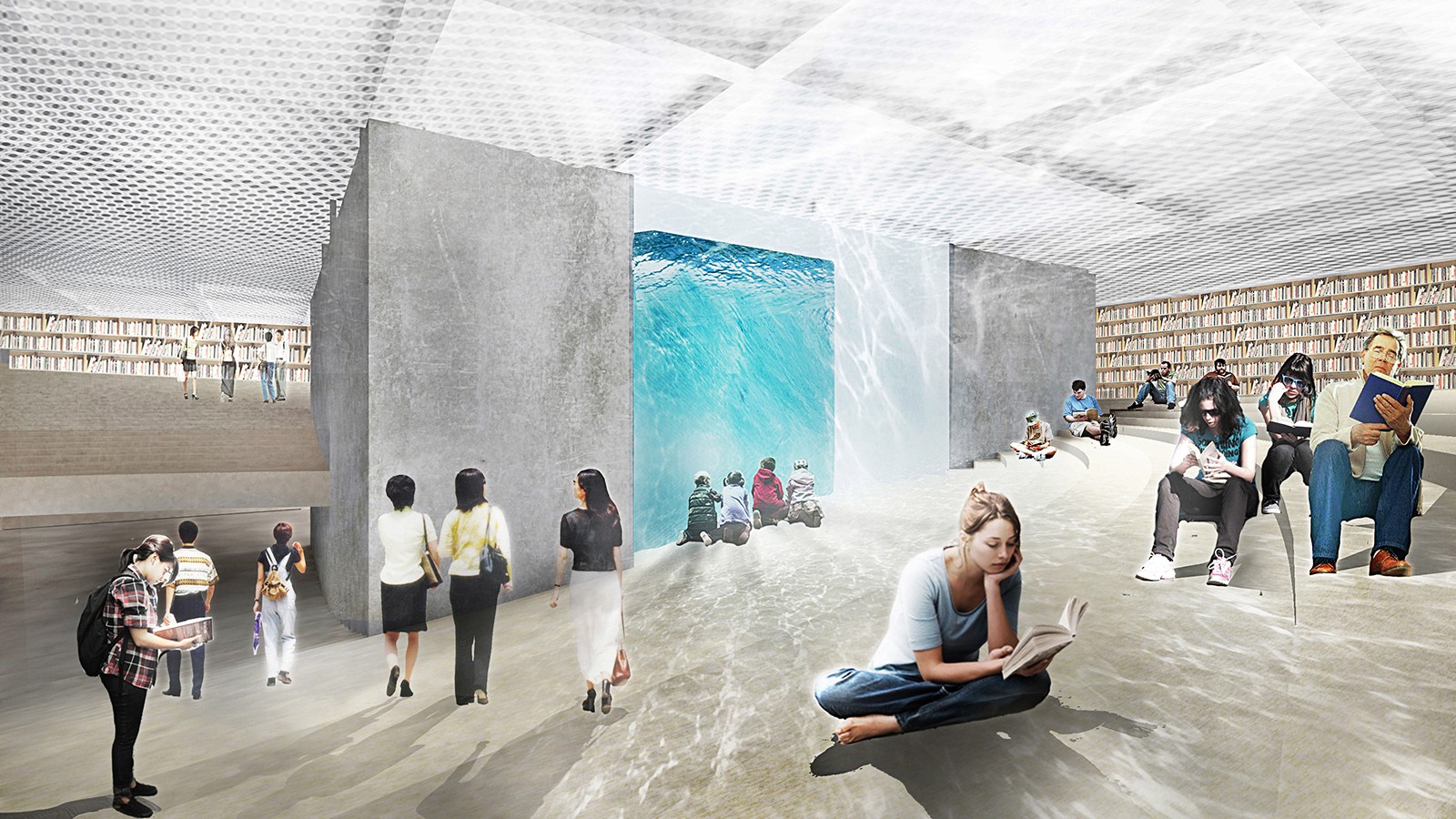 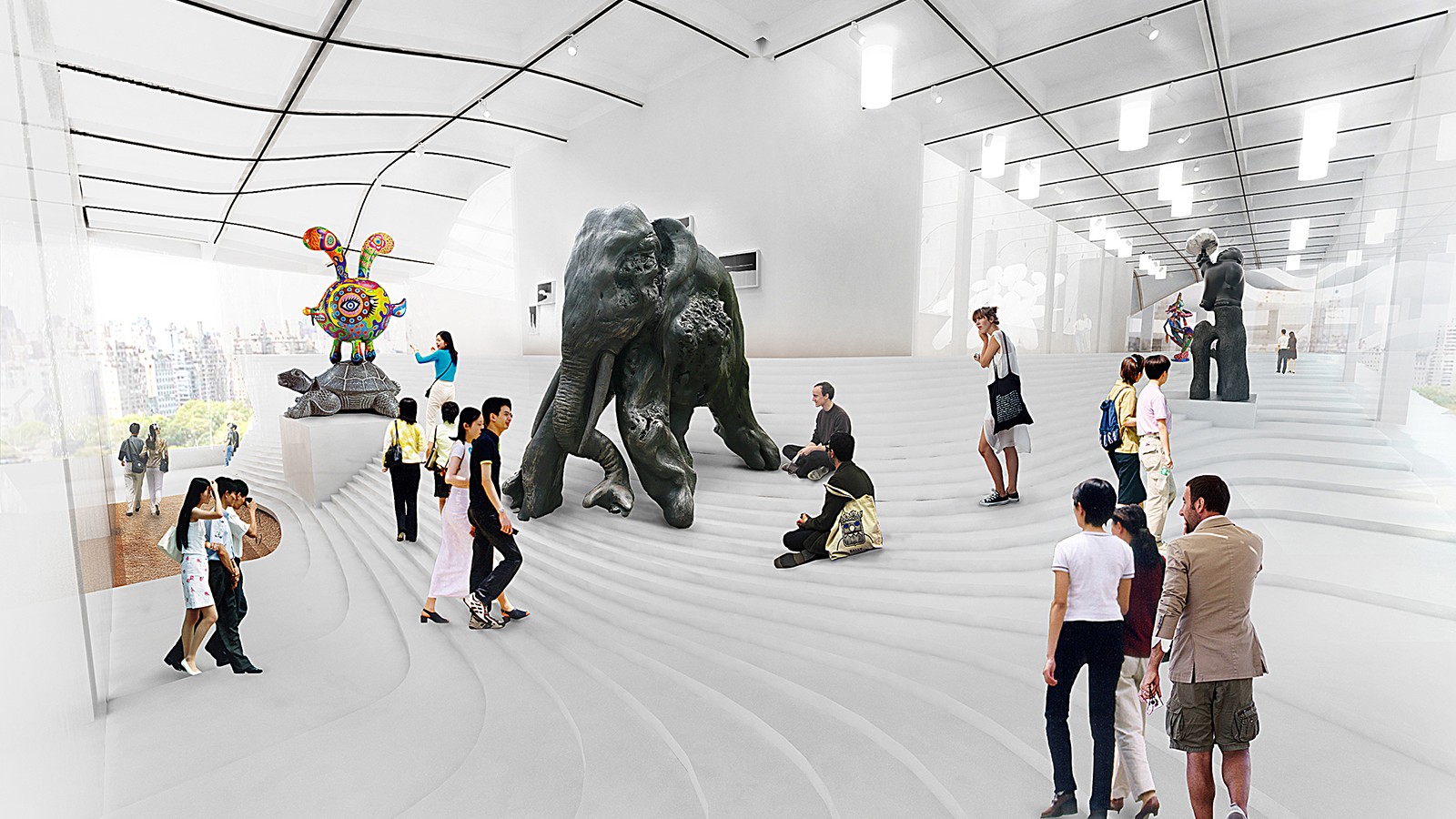 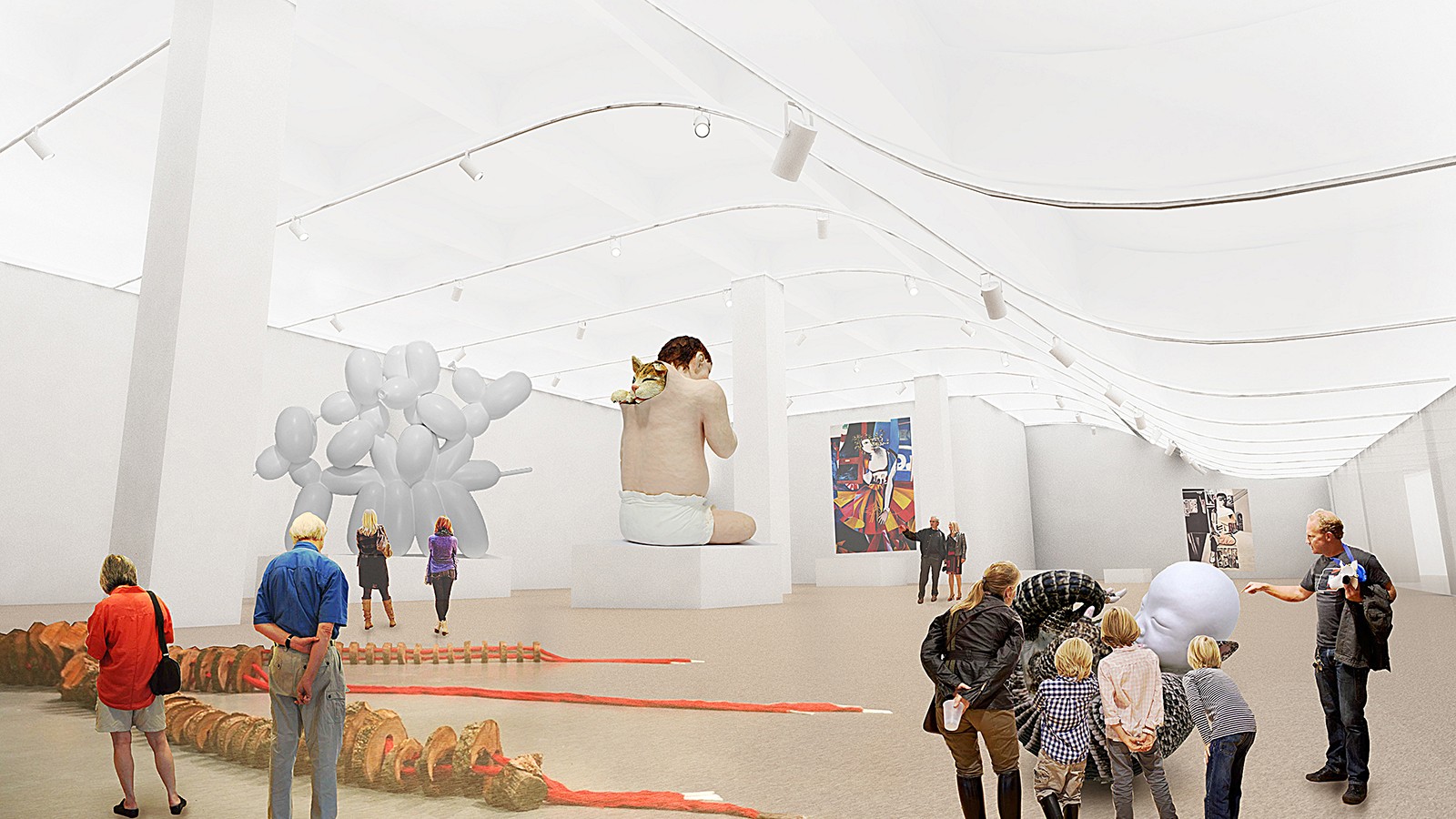 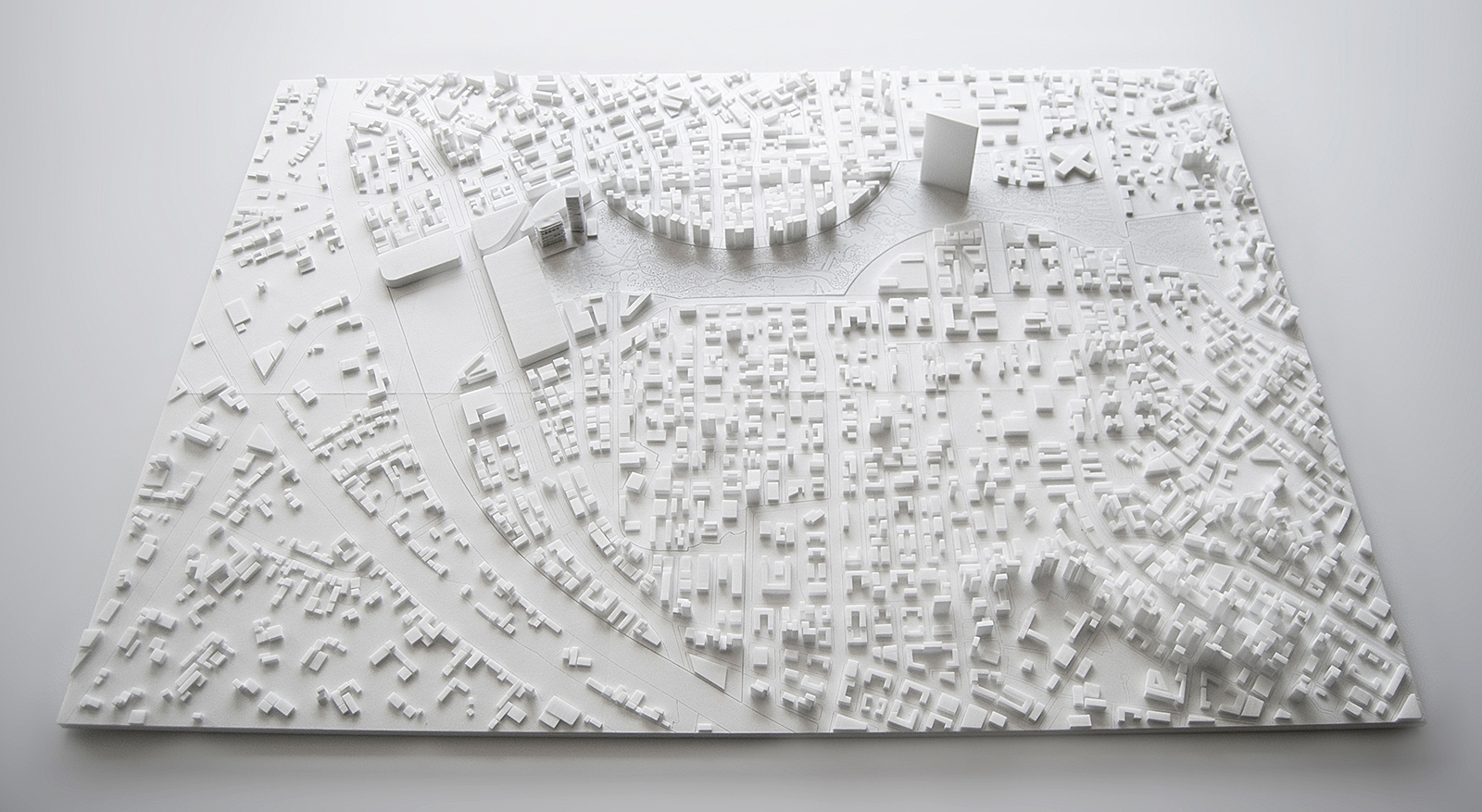 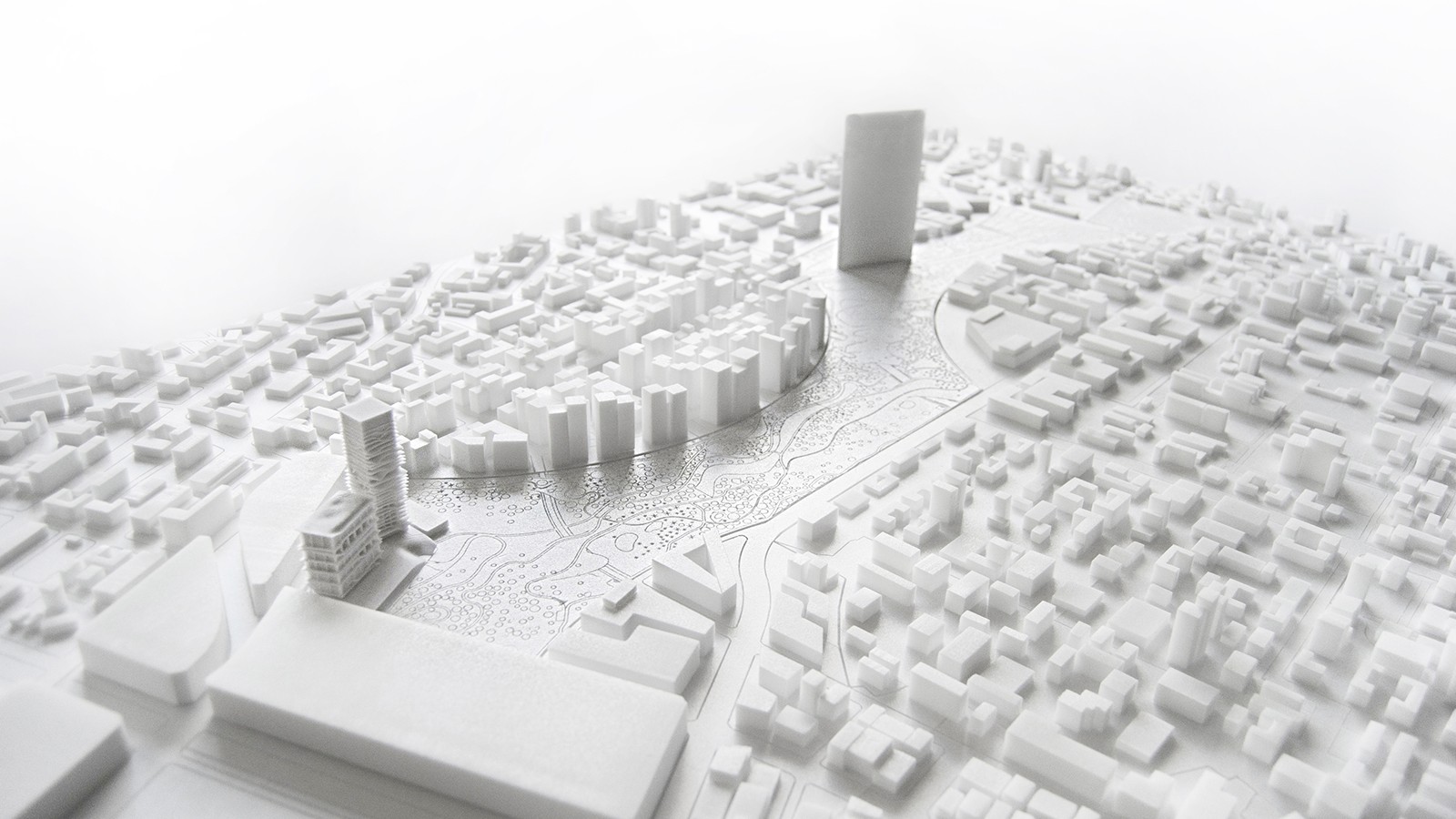 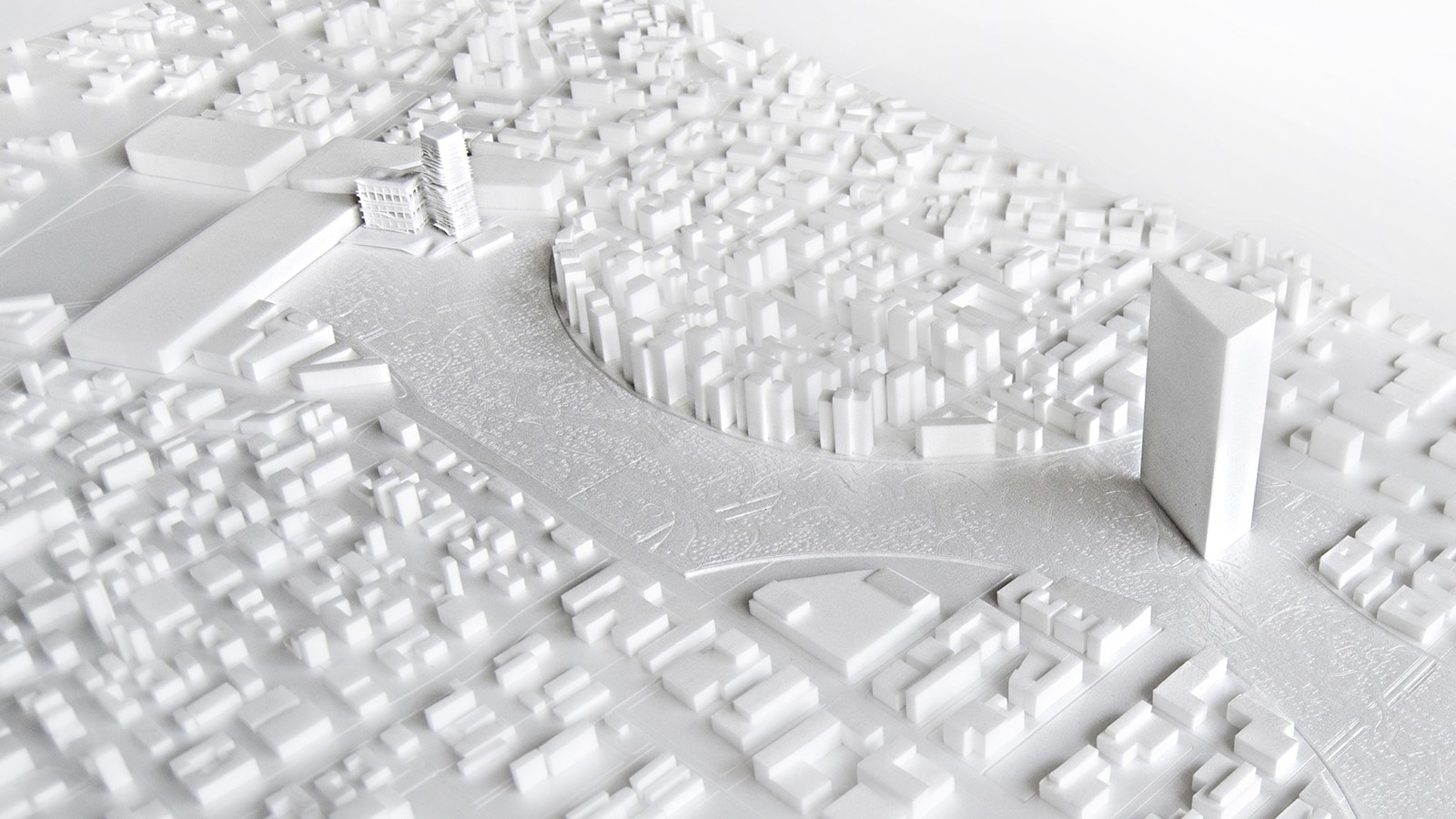 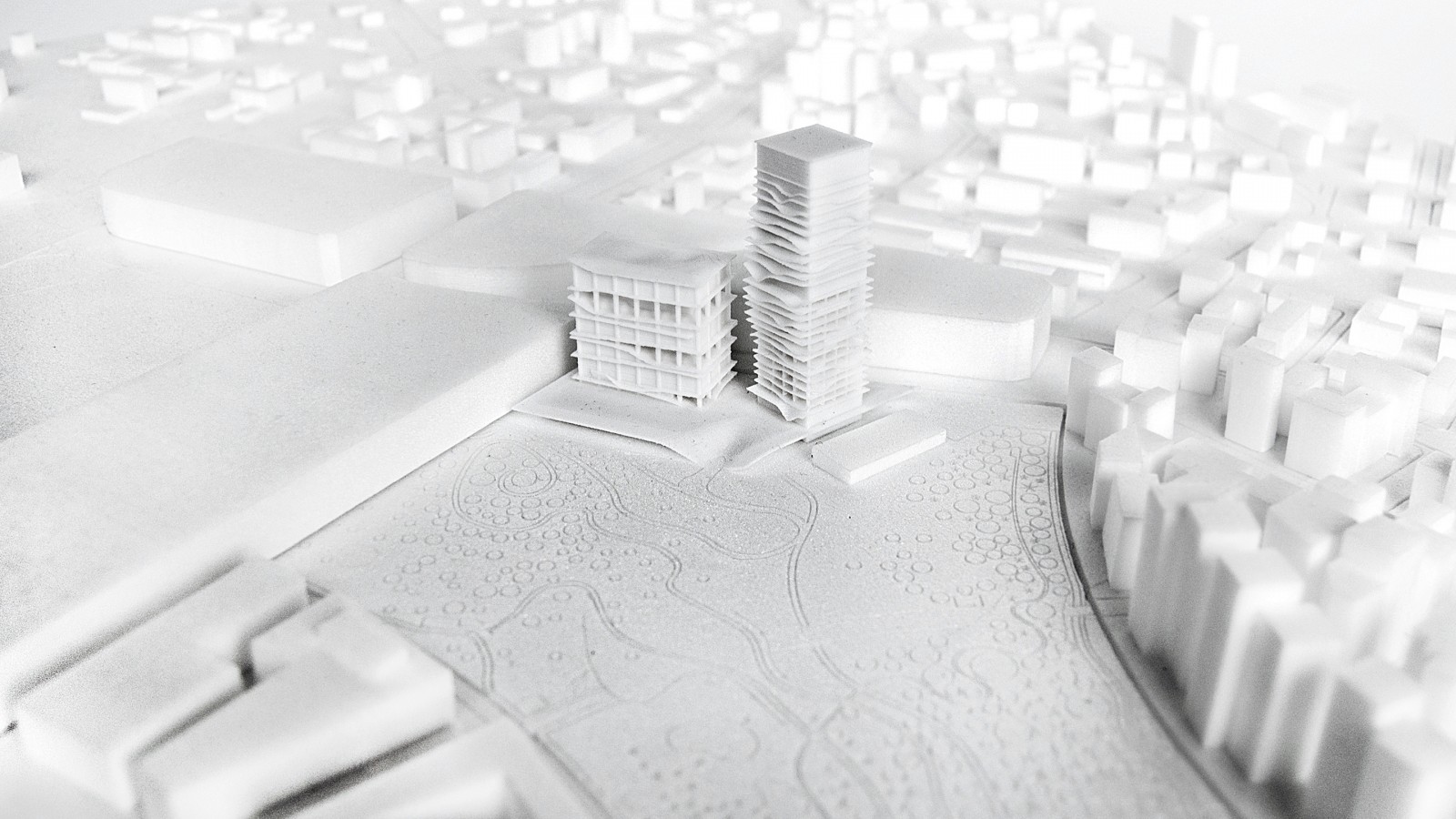 Water Damper Towers - Towers with a library and museum in Taichung,Taiwan
What If By Solving One Important Local Issue We Could Prevent Another One From Happening?

Taichung City Cultural Center is a project which aims to present the possibility of using local features to protect from the very location itself, turning limiting factors into interesting project features.
The tower building would protect itself from earthquakes by gathering rainwater in vertically stacked tanks thus regulating the seismic oscillation.

With an average annual precipitation of 2500 mm and the climate heavily influenced by the monsoon season, Taiwan is a country which receives a lot of rainwater. At the same time it is officially classified by the UN as a “water deficit country” with the rainwater amount per person at only 1/6 of the world average and water shortages usually appearing every year between March and May. Due to its high population, topography with its steep hills causing water to drain into the ocean and uneven concentrated rain distribution, only 20% of water is left for consumption, making water an important and precious resource on the island.

If the water resources could not be allocated well, the related problems will grow. The strategies currently carried out are long-term centrally administered efforts. We are proposing a more local water management agenda with our building as its showcase.

Earthquakes – A Major Issue In Taiwan

Taiwan is in a seismically active zone, on the Pacific Ring of Fire at the western edge of the Philippine Sea Plate. Geologists have identified 42 active faults on the island. Earthquakes appear mostly on the east coast causing little damage but smaller quakes beneath the island itself have historically proven more destructive. Between 1901 and the year 2000 there were 91 major earthquakes in Taiwan, 48 of them resulting in loss of life. The most recent major earthquake was the 921 Earthquake, which has struck on September 21, 1999, and claimed 2,415 lives. Monitoring those potential disasters is not enough. Poor construction standards have been blamed for casualties in a number of major earthquakes. Many modern buildings and facilities in Taiwan are constructed with earthquake safety in mind but a whole new strategy applied from the bottom up which might help to improve the earthquake resistance of entire cities needs to arise.

To reach Zero Carbon and Energy Plus standards and secure the building’s safety, a lot of technological devices are being used. Their production is expensive and sometimes unsustainable. In the Taichung City Cultural Center we are proposing a building which through its performance gathers resources, produces energy and by doing this, is resistant to hostile environmental conditions. All the limiting factors such as overheating and pollution would be combated in natural ways with wind and water.

By gathering water the building could be protected from local disasters. Its mass would perform as an earthquake damper defensive mechanism. The waves and water weight in motion in a closed tank is proved to be a counterweight for seismic forces and helps to regulate the oscillation of the building’s structure. Together with a column-slab primitive structural system with minimized diagonal connections, a tall profile and terraced form which performs best in seismic locations, the facility could be disaster proof.

Sustainability in architecture is always inserted within a top-down approach, where the buildings receive sustainable patches to achieve energy production. In order to generate an optimal energetical system, design needs to have a more bottom-up approach. The whole site plot area may and should be used to harvest water. The best gain of the surface is far larger if there would be no building at all. To improve this as much as possible in the TCCC design the building coverage ratio is minimized. By lifting part of the landscape, the whole complex is refrained from underground excavation what enhances water retention and provides as much green spaces as possible. The main plaza, all driveways and walkways and ground floor area with a multilayered gathering system have a permeable porous design for storing water.

The building would be built as a compilation of a reinforced concrete terraced pools forming a rainwater collection system, a water collectors chain having their beginning on a lifted plaza. The ground floor area would be free and open which would maximise the water gain as much as possible. The plaza would feature a series of openings which would be intakes for descending water towards the ground floor layers.

The facade is designed to be aesthetically appealing yet practical, putting a strong focus on water gathering and improvement of its quality. Consisting of a series of sculptural fluid forms, which encourage the natural movement of water by channeling it into terraces, it would act as a set of big rain gutters in the upper part and ponds in the down part of the building collecting water runoff which would be in continuous move. Thanks to that a hygienic ambient would be kept and small plants would be irrigated. This series of spiraling surface modifications would form a path encouraging the water to act in a natural way. The movement of water depending on its speed and way of falling could create different ambients and atmospheres in places where it would be required. Fast streams would be louder and not appropriate in reading areas where a slower flow of water would be used for example. From every level, the water would be stored and transferred to the main core where it would be filtered in the water tanks. When there is too much water to be captured by a single pool the extra runoff water would spill out and cascade down to the next terrace or to the main perforated plaza leading it to the ground floor.

We want the functions of our building to live around water. The buildings are organized as an array of public spaces rather then around a single function. This form provides a more dynamic floor plan and vertical organization. Water and people flow are closely related. Water generates functions like a seating area or desired atmospheres.

Rainwater would be captured on the roof and terraces of the buildings. Reading, exhibition and archive areas with its book stacks and precious works of art would be divided with the facade from the water flow allowing to create and maintain a desired micro climate. Facade running water which would act as a cooling device and bring diffused daylight in special places. It would feature levels where water would be sent directly to the core tanks to be filtered and recycled. The rooftop water would drain into the damper tanks which would also perform as a filtering and storing device. Extra water runoff would fall on to the plaza and then through openings onto the ground floor retention layers. Filtered water would run to the water collecting tanks in the underground level which would also use hydraulic power to drive out the dirt from the city floating water during the typhoon season. At the same time this will not affect the downstream water supply and its capacity. Recycled stored water would be used in toilets and in fire sprinklers.

The water tanks on the top of the Cultural Center are visually exposed in order to strengthen their role as a show case device which would protect buildings during earthquakes becoming an attraction point for the public and tourists.